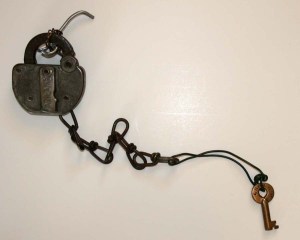 This is a key and padlock from the Laramie North Park Railroad, one of the railroad companies in Centennial’s past. In the early 1900s, Isaac vanHorn from Boston partnered with Fred Miller from Laramie. They had grand plans for the Rocky Mountain Club at the base of the Medicine Bow Mountains. To get people to their resort, they had to build a railroad from the Union Pacific line in Laramie west to Centennial. Took them seven years to get here, but it left us with a railroad line that was used by many until the mid-1990s.